NyPa Wild Wheat (Distichlis palmeri) is a halophytic perennial crop that has been developed from a grain that the Cocopah Indians once harvested as a major food source in SW USA. Having originally being thought of extinct, a massive search was conducted to determine if there were any remaining pockets of this grain producing grass remaining. After some areas had been identified, a breeding program was conducted in the USA to increase grain yields from approximately 5 kg/ha to 2 tonnes/ha. After the breeding program had was completed, seeds were brought into Australia from the USA during the early 1990's. NyPa Wild Wheat like is similar to NyPa Forage and Turf in growth habit. It is more salt tolerant than the NyPa Forage and Turf, being able to thrive in ocean water. A deep root system that reaches down at least 1.5 m, it is ideally suited to areas saline discharge zones, where it can readily access the saline water, and dry out the soil profile, while producing a valuable grain. The grain that is produced is ideally suited for human consumption, with an amino acid balance that is more favorable than wheat, and it is also gluten free and has a pleasant nutty flavor. Work with the grain in Australia has shown it to have a higher yield of flour to grain that wheat, it's starch rapidly retrogrades an behaves as an emulsifier.   (Potential Applications of Distichlis palmeri grain in the production of food for human consumption (regency Institute of TAFE, Regency Park SA 5010 Ralph J P 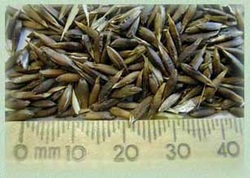 A commercial release of NyPa Wild Wheat is sometime away as some additional breeding is required to fine tune the grain for Australian conditions.