Yensen N.P 2003
The NyPa plants have an exceptional capacity to move salt out of the water they take up in respiration, this is due to its deep root structure and it's very efficient salt gland. This diagram illustrates the different potential fates of this salt, It either falls to the ground and is washed away or back into the aquifer or is blown away.  (reported in Leake et al 2002,2016)﻿[1]   ﻿
Leake J E The role of NyPa Distichlis spp. cultivars in altering groundwater & soil conditions – a work in progress.  Salinity Seminar. Hydrological Society of South Australia, Australian Geo-mechanics Society, South Australian Chapter, and International Association of Hydro-geologists, Australian National Chapter, North Adelaide, 14 July 2003 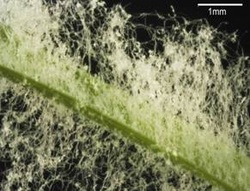 This is a photo of the NyPa Forage salt gland in action, the characteristic fine salt 'whiskers' finer than a human hair are shown exuding from the leaf salt glands. In humid conditions these crystallize and drop off onto the ground. In dry air conditions hypothetically they blow away to rejoin the atmosphere where much salt comes from according to Teakle (reported in Leake 2002)    Photo taken by Mark  Sargeant in the laboratories at La Trobe University in Victoria

This photo shows the action of the roots penetrating to the saline water table,  improving soil structure and drainage and soil carbon through the Rhizocanicular effect, as described by Yensen (reported in Leake 2002,2016)[1] Photo taken at Wickepin Western Australia by Raymond Matthews. 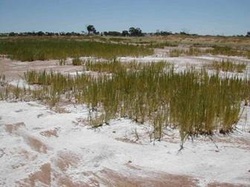 The effect of these processes can be seen in this picture where salt has been taken up from the saline aquifer, exuded through the NyPa leaves and dropped on the ground where rain is washing the salt away. Photo taken at Wickepin Western Australia by Raymond Matthews

Of note in connection with the  plant’s capacity to  rehabilitate degraded land is its  capacity to tolerate and move  heavy metal salts thought its leaves.